Since 1.3, Minecraft itself uses several plugin channels to implement new features. These internal channel names are prefixed by MC|. They are not formally registered using the register channel. The vanilla Minecraft server will send these packets regardless, and the vanilla client will accept them.

The Notchian server sends a MC|Brand packet right after it sends a Join Game packet, and the Notchian client sends it right after receiving a Join Game packet. However, some modified clients and servers will not send this packet (or will take longer to send it than normal), so it is important to not crash if the brand has not been sent. Additionally, the brand may change at any time (for instance, if connected through a BungeeCord instance, you may switch from a server with one brand to a server with another brand without receiving a Join Game packet). 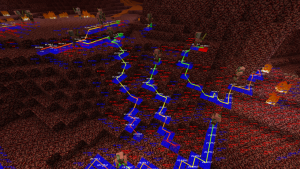 What appears to be the purpose of MC|DebugPath as seen in the snapshot 16w14a announcement. This is not found in the normal game.